This Saturday, November 12, from noon to 2:30 in Sarnoff Corporation's Auditorium, the David Sarnoff Library will host "The Great Inventions in Central New Jersey" for the Princeton-Central Jersey section of the Institute of Electronic and Electrical Engineers (IEEE).

Jack Stanley, Director of the Edison Museum at Menlo Park will describe and demonstrate some of Thomas Edison's inventions, including the phonograph, created this first, and most significant, invention factory in what is now Edison, NJ.

Dr. Alex Magoun , Executive Director of the David Sarnoff Library, will give an illustrated lecture on "The RCA Origins of Everyday Things": color TV, video displays, video cameras, semiconductors, and computers. The David Sarnoff Library will also be open to tours showing many of the technologies seen and discussed on-screen.

Dr. David Hochfelder, Fellow of Livingston College at Rutgers University and Assistant Editor at the Thomas Alva Edison Papers, will lead a walk through the IEEE History Center's online museum and the wonderful store of documents online at the Edison Papers website.

Thanks to the sponsoring local chapter of the IEEE, there will be refreshments, but you should RSVP to pcjs.event@ieee.org to ensure there is food for all. The IEEE chapter already has received 75 reservations. Please put “RSVP INVENTIONS” in the subject.
Posted by David Sarnoff at 6:15 PM 1 comment:

War of the Worlds Returns

FOR IMMEDIATE RELEASE
Contact: Alison Donald, (609) 688-0773
DAVID SARNOFF LIBRARY TO HOST LIVE
“WAR OF THE WORLDS” RE-ENACTMENT ON OCTOBER 29
Full-Scale Performance Will Mark the 67th Anniversary of Welles’s Radio Broadcast
PRINCETON, N.J., October 13, 2005—Reviving one of the most famous events in American radio, the David Sarnoff Library, in cooperation with the Hunterdon Radio Theatre and New Jersey Antique Radio Club, will host a live re-enactment of Orson Welles’s 67-year-old broadcast, “War of the Worlds,” based on H.G. Wells’s classic story. This family-friendly event, which will benefit the Library’s renovation, is scheduled for Saturday, October 29 in Sarnoff Corporation’s auditorium in Princeton, N.J.; a matinee and evening performance will occur, as well as a special benefit reception.

On October 30, 1938, Orson Welles and his Mercury Theater On the Air captivated the nation and set off widespread panic—especially in New Jersey and New York—with a dramatization of H.G. Wells’s late-19th Century fantasy. Thousands of listeners across the country mistook the broadcast for news reports of an actual Martian invasion that detailed meteor landings in nearby Grover’s Mill, N.J. and aliens killing earthlings with death-rays. What resulted was mass hysteria, with residents fleeing their homes or joining to combat the “Martians.”

“David Sarnoff predicted and innovated the power of network broadcasting,” says Alex Magoun, executive director of the David Sarnoff Library. “Welles’s broadcast showed how the media could instantly encourage national hysteria as well as national unity. We think that’s a powerful lesson worth repeating. Moreover, the Princeton Observatory and Grover’s Mill, where the Martian launches and landing were reported, are only a mile away from us.”

The “War of the Worlds” broadcast, which was written by Howard Koch and made famous by Welles is “arguably one of the best radio dramas of all time,” says William Spear, founder and president of the Hunterdon Radio Theatre. The group, which will stage the re-enactment with more than 20 actors, is “excited about the opportunity to work with the David Sarnoff Library and present its version of the broadcast.” The sound effects and actors’ voices will be transmitted through 1930s microphones to 1930s radios, provided by members of the New Jersey Antique Radio Club. An interactive discussion, led by Magoun, will follow the program.

Library Benefit tickets are also available for $40 in advance ($50 at the door). Benefit guests will not only enjoy the evening performance, but also a tour of the Library and dessert reception after the broadcast to meet the cast. Live music will be provided throughout the reception by renowned thereminist, Kip Rosser. Tickets are limited and advance reservations are strongly recommended.

All funds raised from this event will support the David Sarnoff Library, a nonprofit organization housed within Sarnoff Corporation in Princeton. Incorporated as the David Sarnoff Collection, the Library contains an archives and museum with the state’s largest holdings of RCA historical materials, and is dedicated to the understanding and promotion of electronic innovation. Funds will specifically pay for the design of two new exhibits in the Library—David Sarnoff and the Innovative Spirit and Six Innovations that Changed the World. The Library is open by appointment to individuals and school groups. For more information, visit www.davidsarnoff.org on the Web.

The “War of the Worlds” re-enactment is made possible, in part, by in-kind support from Sarnoff Corporation; the Howard Koch Estate; Hunterdon Radio Theatre; New Jersey Antique Radio Club; Kip Rosser; and suite6design.

Additional assistance and funding has been provided by the Board of Directors of the David Sarnoff Collection; the New Jersey Principals and Supervisors Association; Panasonic Technologies, Inc.; and an operating support grant from the New Jersey Historical Commission, a division of the Department of State.

For more information about the event or advance ticket reservations, send an email to waroftheworlds@davidsarnoff.org, call (609) 688-0773, or copy and print the order form below (full-size is 8.5" by 11"): 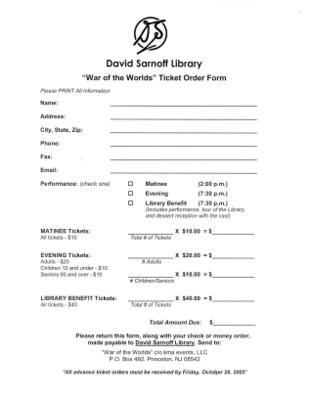 Posted by David Sarnoff at 1:59 PM No comments:

David Sarnoff Library Open House
When: Saturday, July 16, 2005, 10 a.m. - 4 p.m.
Where: Sarnoff Corporation Lounge and Auditorium and the David Sarnoff Library
What: Radio repair clinic, lectures, old-time radio for children, exhibits on innovations that changed the world
Why: To promote and appreciate the innovative spirit
Cost: Free (not including parts), contributions welcome

Once again the David Sarnoff Library opens its doors and offers a variety of experiences that refire the innovative spirit in visitors. "Almost 100 years ago, David Sarnoff saw the future in electronic communications," says Executive Director Dr. Alex Magoun. "He and countless engineers, scientists, and staff at RCA and related companies have worked since then to make that future happen. We're pleased to show off some of their accomplishments and have visitors experience some of the cultural changes that resulted from their innovations."

Dr. Magoun will give an illustrated lecture on that theme, David Sarnoff and the Innovative Spirit, at 11 a.m. and 2 p.m. in the Auditorium. The basis for the coming redesign of the Library's exhibits, the lecture shows how Sarnoff expanded the possibilities for electronic media throughout his life and through the legacy of Princeton's David Sarnoff Research Center.

There were will be numerous other activities as well, including

1. Gary Wilson, Public Information Officer of the American Radio Relay League, will offer a display and offer visitors use of an amateur radio station. Amateur radio volunteers and their technology operate emergency communications in networks throughout the world wherever power lines have failed; they also use the technology for Morse and voice communications as a hobby that dates back to the beginning of Sarnoff's career one hundred years ago.

2. Visitors can compare radio culture for children in the 1920s and 1930s with the electronic entertainments that they enjoy today through computer games and DVDs, courtesy of Friends of the Library Jerry and Marsha Simkin. What did people listen to on the radio 50-70 years ago? Hear for yourself on a variety of working antiques...

3. Puzzling over the value, condition, or future of your old radio? The New Jersey Antique Radio Club offers a free clinic. Call (609) 734-2636 with the make and model to make an appointment on the hour for one-on-one attention. Many radios can be fixed in less than 60 minutes, and the New Jersey Antique Radio Club’s experts will do it for free! Parts are not included but are generally surprisingly inexpensive.

4. The museum will be open and include the following exhibits.

A. Sarnoff's career started with radio, which looked quite different from today's products. RCA's first radio from 1922 would have a hard time fitting on your bedside table, or in your car or pocket. The 1928 RCA-Victor home entertainment system that Sarnoff conceived of, combining record player and radio, probably wouldn't fit with the decor in your home either, and it doesn't play digital media.

B. Remember records? You can see an exhibit showing the iPod of its generation, RCA Victor's revolutionary record changer from 1949 and the seven colors that 45s first appeared in. The world’s first 45, invented in Camden, is on display while a working 45 Victrola and a Columbia cylinder Graphophone will play some of the sounds you want, when you want them.

C. Electronics became smaller with Bell Labs' invention of the transistor, and researchers in Princeton improved on it to make possible the smaller and versatile devices on which we rely today. See the world’s first transistor radio and the first solid-state video camera, designed and built at the David Sarnoff Research Center in the early 1950s. See yourself in living black and white through a 1951 TV camera on the 1948 RCA television--both built in Camden--that started America's video age.

D. RCA’s first color television, the CT100, is rarer than a Stradivarius violin but you can watch a variety of antique color videos during the day.

E. Why do televisions have to be so boxy? Former DSRC researcher George Heilmeier just won the Kyoto Prize for leading a team in the invention of the first liquid crystal displays (LCDs), based on a discovery by the DSRC's Richard Williams. The LCDs inspired researchers around the world to develop the flat panel screens we use in everything from cell phones to wall-size video. You can see the notebooks and early LCDs on display.

This event is made possible in part through a general operating support grant from the New Jersey Historical Commission, Department of State.
Posted by David Sarnoff at 10:20 AM No comments:

What: An Illustrated Lecture (free!)
When: Wednesday, June 15, 7:30 pm
Where: Sarnoff Corporation Auditorium, 201 Washington Road, Princeton
Who: Alex Magoun, Ph.D., executive director of the David Sarnoff Library
Why: The Library’s contribution to the CelebrateNJ! festival in June

Color television, transistors, computers, video cameras, liquid crystal displays (LCDs)—these technologies all shape how people live and communicate around the world. They also share a common origin, here at Princeton's RCA Laboratories. Guided by Alex Magoun, executive director of the David Sarnoff Library and author of the Arcadia Books photohistory of the Labs, take a tour of the stories of their invention and innovation, focusing on the human factors that shaped their development at one uniquely innovative company.

“Three generations of engineers and scientists have created a rich and unique history of world-changing innovation that runs right into the present,” says Magoun. "This talk skims the surface of a well of creativity matched only by Thomas Edison. It may also connect you with your neighbor, or your neighbor’s parents, or grandparents.”

“Five Princeton Inventions” offers a useful source of local history, and an introduction to issues that innovators confront today. A condensation of Dr. Magoun’s popular Princeton Adult School class last fall, this illustrated lecture offers the same mix of education with dashes of entertainment. Magoun explains the roles that inventive styles, funding sources, corporate priorities, inventors elsewhere, commercial rivalries, and government involvement all have on the process by which inventors, entrepreneurs, and consumers improve our lives.

Doors will open at 7 pm and visitors can see the inventions discussed in the David Sarnoff Library before and after the lecture. Refreshments will be served. Call (609) 734-2636 for more information, and visit davidsarnoff.org for directions.

This lecture is made possible in part through a general operating support grant from the New Jersey Historical Commission, Department of State.
Posted by David Sarnoff at 11:52 AM No comments: