To kick off the celebration of the 70th anniversary of the historic War of the Worlds radio broadcast, which will be held at the David Sarnoff Library on October 25th, we've put together a little YouTube teaser advertisement. Noted thereminist Kip Rosser composed and performed the original music, WellsWelles Etude, for Seven Theremins; logo design winner Monica Vagnozzi's artwork is featured at the end of the video; and volunteer Sharon Chapman is responsible for the photographs and for putting the project together. Enjoy the video, and feel free to post it on your websites and share it with your friends.

Keep watching this blog for announcements about the October 25th celebration as the events are finalized and announced.
Posted by slgc at 7:55 PM 1 comment:

How often do you expect to get a question about pre-1940 Korean phonograph records? If you answer the Inbox at the David Sarnoff Library, you could on it happening once in a lifetime because of Victor Talking Machine Company and RCA Victor's international operations. But this month, to our surprise, two scholars made inquiries, with an Argentinian graduate student inserting her request about the Victor 1920s offshoot, the Pan American Recording Company, in-between. Not everyone got what they hoped for, but the Library's executive director, Alex Magoun, demonstrated an intangible and invaluable value to the scholars but suggesting alternative sources and linking together people with shared interests. 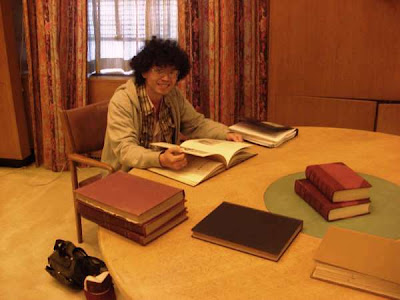 Oriental Culture. A cultural anthropologist by training, Yanchy is studying the relationships created between Japan and Korea by sound recording early in the 20th century, when Japan dominated Korea's audio entertainment industry. After completing a semester at Yale University through the Todai-Yale Initiative, he arranged a visit to the Library to draw on its runs of RCA publications for information on the company's international connections in the 1920s and early 1930s.
Three weeks later, after Yanchy had returned to the humidity of Tokyo in August, Mi-Hye Chyun of Rider University's Westminster Choir College emailed the Library about several Korean records made by the Victor Talking Machine Company between 1908 and 1910. The Library doesn't have a set of Victor's catalogs, but Alex put her in touch with Yanchy and connected her to the University of California, Santa Barbara's Encyclopedic Discography of Victor Recordings. The discographers note on their site that their knowledge of East Asian Victor recordings is especially weak, so perhaps these connections will help improve it.
Just as Yanchy was sitting down to begin paging through the RCA News, in came an email from Marina Cañardo of the University of Buenos Aires (Universidad de Buenos Aires). Marina is a doctoral student in musicology and is researching "the relationship between Argentine popular music and the recording industry in the 1920s." Alex wrote her what he knew about sources in the United States and connected her to Yanchy and his professional colleague, Professor Susan Schmidt-Horning of St. John's University. Professor Schmidt-Horning is finishing her book, Chasing Sound: Recording Studios in America, almost as this is written, and looks forward to meeting her new colleagues at a suitable SHOT or ICOHTEC or other scholarly meeting.
Would you like to know what the Library and other organizations offer in the field of recording history? Here's what Alex wrote Marina:
". . . we have posted the significant Victor documents owned by the Library on the website: the two Sooy memoirs (based on their journals) and the history of Victor by B(enjamin). L. Aldridge.
. . . Unfortunately, the David Sarnoff Library has no information on the corporate operation of the Victor company or its domestic or international recording groups. Mr. Sarnoff kept virtually no records of his management of RCA, and we have yet to receive any collections of papers related to Victor's record business.
"BMG, which bought RCA Records from General Electric Company in 1987, has records of recording dates at its archives in New York City. But corporate archives do not exist for outside researchers, and it is difficult to get access to BMG's Victor data.
"The best source that I know of is Eldridge Johnson's papers. Johnson started and ran Victor until 1927. His papers are located at the American Heritage Center in Wyoming, with photocopies at the Johnson Victrola Museum in Dover, Delaware. His correspondents included the head of the recording division and possibly Mr. Staats. Unfortunately, the AHC does not list the collection in its online catalog, and the Victrola Museum is not easily used by archival researchers, especially at a distance.
"Another source of information would be the 78-L List. The variety of collectors there may be able to help you with specific questions.
"Victor published a magazine, Voice of the Victor, for its dealers for about 25 years. There is a Spanish-language version for Latin America from 1915-31. A dealer in Uruguay sold several copies on Ebay several years ago. The Camden County Historical Society in Camden, NJ, has a large set of the English-language edition, and the Glendale Public Library in California has a large but incomplete collection as well.
"Some other writers on the music side of the record business are Ruth Glasser (My Music is my Flag: Puerto Rican Musicians and Their New York Communities, 1917-1940; U. of California Press, 2000) and David Suisman (The Sound of Money: Music, Machines, and Markets, 1890-1925, Columbia University dissertation, 2002), and William Howland Kenney (Recorded Music in American Life: The Phonograph and Popular Memory, 1890-1945; Oxford U. P., 1999). Their bibliographies may offer you some other avenues for research."
Posted by David Sarnoff at 5:43 PM No comments:

If you had 3,000 photonegatives sitting in acidifying cellulose sleeves, you'd want to rehouse them, wouldn't you? That's one of the challenges facing the Library, and a concerted effort this summer by archival assistants old and new has resolved it. The photonegatives in this case contain 4" by 5" images of the RCA Laboratories staff taken between in-house by Norm Newell, Tom Cooke, and Marty Zak from the 1950s to the 1980s. Everyone who needed a photo for a passport, an award, or a c.v. got a photo, and a sleeve with their name and the date it was taken. Everyone from A to S, that is, the last tray of negatives being absent when executive director Alex Magoun retrieved them from the Labs' abandoned photo laboratory. He put them in archival boxes designed for minimal chemical activity and the trapping of any reactive off-gassing from the photos. But who was going to remove those sleeves slowly yellowing as their translucent cellulose broke down?
The answer lay in the Library's crack crew of students from West Windsor-Plainsboro High School North and South Brunswick High School. Since this spring Adnan Khan, Kishore Riyali, Ujaas Barvalia, Harshal Patel, Samarth Patel, Pooja Mantha, Pranavi Vemuri, and Rajiv Putcha began the tedious task of copying the information on the old sleeve and removing each negative and sliding it into an inert polypropylene sleeve. They printed neatly, deciphered the sometimes flowing script and scrawls of the photographers, and most moved on to other pursuits this summer. Rajiv, however, brought his brother Rohith and sister Rohini to the Library, and they in turn recruited their friend Rahul Parekh. 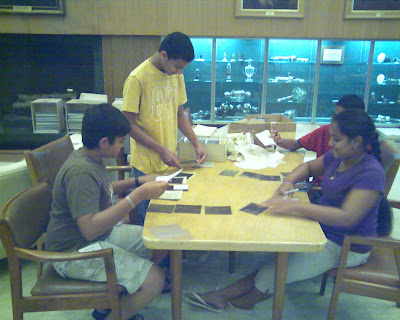 Halfway through the L-N box (R. P. Labe - F. Nyman), they caught a flyer, created an efficient system that still let them talk, and moved through the rest of the collection in jig time. Way to go, gang!
Posted by David Sarnoff at 4:25 PM 1 comment:

While we await the response of several hundred school principals to our field trip invitation, two different organizations visited last week. Under the initiative of New Jersey state curator of 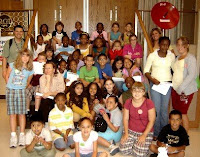 natural history David Paris, the museum's Kaleidoscope summer science academy learned about some of the state's traditions in high-tech research and innovation, sound waves and their application, and data gathering techniques in the museum. Executive director Alex Magoun and docents Vrinda Nair and 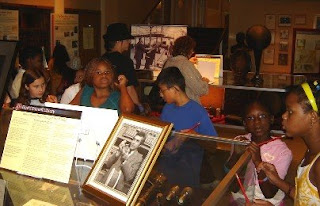 Swapnil Mhatre guided the 36 students and their chaperones through two hours of science and history, no small feat when your students run from 6 to 12 years of age! On Friday, through the initiative of Tia Clifton of Haven Home in Trenton, the Library hosted a smaller group of girls to learn about David Sarnoff's life and collect information from the museum exhibits. "With every visit we learn something new from the students and about our program, just as they learn a few things from us," says Alex.
Posted by David Sarnoff at 10:07 AM No comments: