If the Martians returned to central New Jersey for an anniversary, what would you do?

“A lot of water has gone over the Grover’s Mill dam since their last visit,” says Dr. Alex Magoun, executive director of the David Sarnoff Library. “It’s time to let by-gones be by-gones, and welcome them back with a festival.” 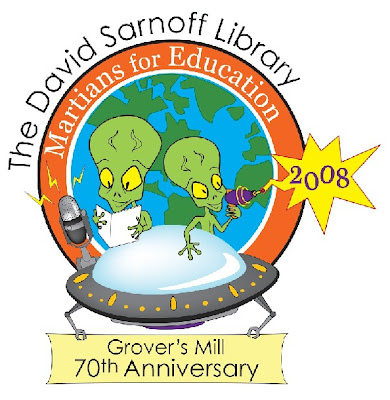 Inspired by suggestions from West Windsor volunteer Sharon Chapman; Gwen McNamara, then of RMJM Hillier (and now Stony Brook-Millstone Watershed Association); and Plainsboro Library director Jinny Baeckler, Magoun did exactly that. The result is the first Martians for Education Festival, a collection of educational and entertaining events in West Windsor, Plainsboro, and Princeton between Saturday, October 18, and Wednesday, October 29.

“By our special logo, you will know us,” remarks Magoun. “We’ve been hosting theatrical broadcasts of the 1938 War of the Worlds radio show since 2003 to help raise money for the Library’s operations. This year, following the initiation of our field trip program, we decided to expand the theme, focus the fundraising, and give something back to the community.”

That something includes events organized by the Plainsboro Historical Society, which will screen the 1953 War of the Worlds movie and run trolley tours of sites related to the alleged landing; the David Sarnoff Library, which will host a presentation in 3D by Dr. Kenneth Kremer on the search for life on Mars; the David Sarnoff Radio Club, whose members will operate radio station W0W in Van Nest Park and explain the role of radio in emergency response; the West Windsor Historical Society, which will host a double header concert by the Mercer County Symphonic Orchestra and Cranbury Jazz Band; and the Princeton Library, where Henry Morse will talk about the 1938 broadcast and why it had the effect it did before playing it back. For the schedule, visit www.davidsarnoff.org/m4e_festival_2008.html.

Capping the festival, the David Sarnoff Library will once again stage Howard Koch’s classic War of the Worlds radio play as produced by the Hunterdon Radio Theatre and the New Jersey Antique Radio Club on Saturday, October 25, in a 2 p.m. matinee and an 8 p.m. benefit. “There’s something magical about watching a live cast perform a classic script while surrounded by the sound and warm glow of wooden radios,” says Magoun. “The original broadcast was the first dramatic demonstration of the power of broadcasting on human behavior. It alternately serves as a caution to blind technological optimism and a call for more education.”

That’s what the Library offers in its field trips: technological literacy as well as inspiration, given the Library’s location next to building where local scientists and engineers invented color TV and LCDs, among other things. Building on David Sarnoff’s passion for education, the Library continues to expand its field trip program, and recently received a $10,000 grant from the IEEE PACE Network to develop two new offerings in digital computing and radio. “Our trips run two hours and give elementary and middle-school students experience with the fundamentals of technologies they use everyday, and an opportunity to explore the social and historical issues surrounding them,” says Magoun. “But to expand access and conduct these trips, we need another staff person, and that’s where the theatre-goers on Saturday night have a stake in our state and country’s future.”

The evening benefit includes music by concert thereminist Kip Rosser, who will play the only musical instrument one doesn’t touch before the play and during the “Out of this World” dessert reception afterwards. The reception features desserts and drinks by Grover’s Mill Gourmet Coffee & Tea, Lindt Chocolate, McCaffrey’s Bakery, Sotto Ristorante, Wegman’s Bakery, and other fine establishments. Tickets are $70, of which $55 is a tax-deductible contribution to the Library, a 501(c)(3) nonprofit charity. They can be ordered online at davidsarnoff.org/shop-wotw2008.html.
Posted by David Sarnoff at 10:56 PM 1 comment: